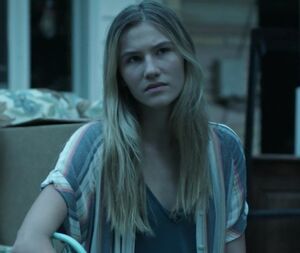 "She needs to learn the value of money."

- Marty about Charlotte in Sugarwood

Charlotte Byrde is a main character on Ozark. She is the daughter of Marty Byrde and Wendy Byrde, and the sister of Jonah Byrde.

Charlotte disapproves of her family's money laundering operation, as opposed to Jonah who learns how to launder money to impress his father. The stress of her family's operations eventually prompts Charlotte to seek emancipation, but drops the idea on the condition that her parents attend therapy.

Charlotte is a sarcastic teenage girl who enjoys her phone, spending time with Wyatt, and smoking marijuana. Wendy complains that Charlotte does not "apply herself".

Though Charlotte disapproves of her family's money laundering operation, she is willing to commit crimes such as theft. At one point she steals a vintage book as a gift for Wyatt, who becomes upset, knowing he is likely to be arrested for possessing the stolen item, as opposed to Charlotte who would likely only get a slap on the wrist. She also stole $10,000 of cartel money, which she split with Jonah. The FBI eventually finds her half of the money in a lunchbox at the Byrde home.

Wyatt Langmore and Charlotte are friends, growing particularly close after the death of Russ Langmore. They are known to smoke marijuana together.

Jonah and Charlotte have a relatively healthy sibiling relationship and seem to care deeply for one another. When Marty and Wendy begin badgering Jonah to get a "normal" summer job, instead of laundering MMO video game currency, Charlotte buys him a drone so that he can enjoy technology while spending time outdoors.