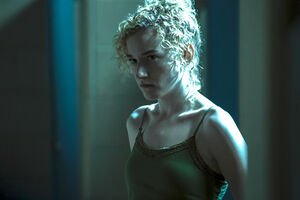 Ruth Langmore is a major character in the show Ozark. She is a strong, smart young woman with ambitions above her lower station in life. She is a member of the Langmore family and daughter of Cade Langmore.

She was born poor and her father is in jail in the beginning of the story.

Ruth grew up in the Ozarks. She is poor and her family lives in a trailer on the outskirts.

On the outside, Ruth is a tough, acidic, somewhat impulsive, career criminal who is seeking to get ahead by whatever means necessary. But as we get to know her, we find Ruth to be highly intelligent woman who is more than capable of handling herself. While she initially planned to learn Marty's trade and then betray him and take over herself, she ended up forming a genuine bond with him and his family and forging a partnership with him. Though this ended after the death of her boyfriend and Wendy's brother Ben.

Ruth has a nasty temper, and can get violent if provoked, such as when she assaulted Frank Cosgrove Jr because he kept harassing her or when she pulled a gun on Russ and Boyd for buying bobcats to sell (this could be justified, as it was her money they used to buy the cats). But she does have her soft side, She is also close with her family, despite how dysfunctional they all are. She was clearly devastated by killing her two uncles Boyd and Russ and was further distressed with her relationship with Wyatt breaking down after being forced to tell him when Cade threatened to tell him himself. Though, after some time their relationship began to mend slowly and eventually they reconciled after she left Marty. She also opened up to Ben and being with him was probably one of the few times that she felt happy, only for that to be taken away from her when Ben was killed as a result of his reckless actions after going off of his bipolar medication. She was devastated by his death and eventually severed ties with the Byrde family once she realized that Wendy had okayed the hit, despite the fact that it had killed Wendy to do it and that she was devastated by her brother's death.

Despite her tough exterior, Ruth is a person who has been through a lot of pain. Her father Cade was a deadbeat, psychotic criminal who often landed in jail and when he wasn't, he often threatened, abused, and harassed her. She craves acceptance and is loyal to those who show her that. Though Ruth withstood waterboarding at the hands on the cartel, she soon exhibited signs of post-traumatic stress disorder from the event, including having a breakdown during her morning shower.

After a very bad beginning with Marty Byrde, Ruth actually goes to work with him.

"I don't know shit about fuck."

"Shut your fuck nugget mouth and get out"

“This is your life. It aint fucking mine.”

"What the fuck are you gonna do? Kill me, you fuckin' bitch wolf?.

Do you know who Ruth Langmore kills?