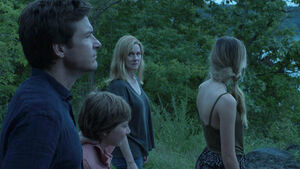 After his business partner cheats a dangerous client, financial advisor Marty must devise a radical plan to save the lives of himself and his family. 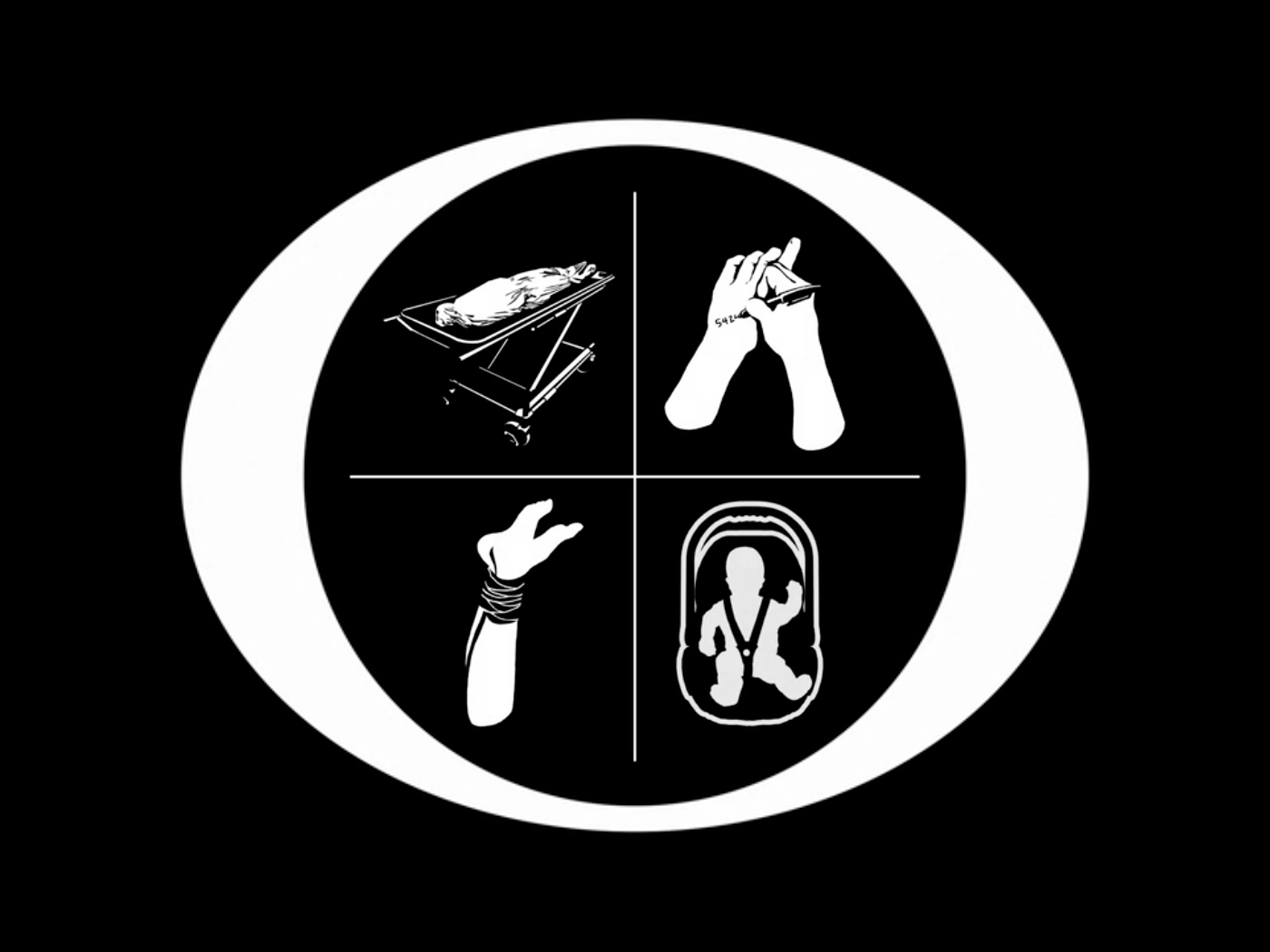 You see, the hard reality is how much money we accumulate in life is not a function of who's president or the economy or bubbles bursting or bad breaks or bosses. It's about the American work ethic. The one that made us the greatest country on Earth. It's about bucking the media's opinion as to what constitutes a good parent. Deciding to miss the ball game, Del play, the concert, because you've resolved to work and invest in your family's future. And taking responsibility for the consequences of those actions. Patience. Frugality. Sacrifice. When you boil it down, what do those three things have in common?

The episode opens at a lake, with a voice over from Marty Byrde about money. Marty is seen throughout the opening scene fishing at the lake, bringing back fish in freezer boxes and loading his car. However, when Marty arrives at home, it turns out his freezer boxes are full of cash, which he is hiding.

Marty is next seen at work as a financial advisor, giving advice to his clients about the world economy. The couple are looking to find a financial advisor to handle their money; one whom they can trust. At that moment, Marty receives an email from "Bob Lily" titled "do not open at work", however, he does so anyway. The email contains a video of two people having sex. Simultaneously, Bruce Liddel enters, explaining that the company cannot take on any more clients, due to the surgical workload that they must handle.

Bruce and Marty are seen touring an office building. Bruce seems to like the office, however, Marty is concerned about the cost of the building's utilities. Bruce tells Marty that he saw the video on his computer and that his wife, Wendy would not be happy if she found out. Bruce questions Marty on his contentment with his life, comparing the two and showing Marty a leaflet for the lake of the Ozark's, suggesting that the two invest in the shoreline.

Next, the family are seen eating dinner together, trying to persuade Jonah to attend his high school dance. An estranged relationship seems obvious between Marty and his daughter, Charlotte. Charlotte asks for money to donate to her friend, who suffers a skin condition, however, Marty is reluctant to provide his daughter with the money, stating "she needs to learn the value of money". The family leave the table one by one, Marty thanking Wendy for her efforts at dinner.

Marty is seen again, but this time at home, watching the video he received via email while his wife sits opposite. At that time, the women in the video turns around and is revealed to be Wendy, his wife. However, Marty does not confront her upon the matter. Marty checks on his children in their beds before driving to a street to pick up a prostitute. Marty has oral sex with the woman; however, it is revealed that it is all in his imagination.

After receiving a phone call from Bruce, Marty makes his way to meet Bruce as "Del's here". Marty meets Bruce and Del at a warehouse, where it is revealed that Marty owes Del $5 million. It is revealed by Hanson Jr. that Bruce and Marty are money launderers. After Marty offends Del, Del becomes angry and shoots a civilian that had gone to use the bathroom. At that moment, it is revealed that Bruce orchestrated the theft of Del's $5 million. As punishment, Del takes the four to a warehouse and shoots Hanson and his son. Bruce reveals that over three years, he has managed to steal $8 million from Del; at which point Del shoots Bruce. Marty manages to strike a deal with Del with a false story about planning to move his family to the Ozarks. A deal is struck of $500 million in five years and Marty must pay back the stolen money.

At home, Wendy consuls Marty to go to the police upon the matter, however, Marty disagrees as the police cannot protect them from the drug cartel, of which is the second largest in Mexico. Marty puts together his plans to pay the $8 million back, while Wendy is told to plan to move.

The next day, at dinner, the family doesn't agree with the move, Charlotte especially, criticizing Marty for the decision as she doesn't understand why they must move.

While Marty works on gaining the cash, Wendy is seen explaining the situation to the man from the video and the fact that her family must move as "everything is on the table".

Having dissolved his financial firm and fired his assistant, Marty meets with Bob to discuss his wife's habits. He is informed that his wife and the unnamed man, which she calls "Sugarwood", meet around twice a week, sometimes at his place and sometimes close to Marty's. Marty enquiries about the feasibility of disappearing and leading new lives, however, is quickly shut down. At that moment, Marty receives a text from his bank, informing him that Wendy had emptied all of his accounts. It is revealed by Bob that the man Wendy has been seeing is named "Gary".

When Wendy arrives back at Gary's apartment, she finds him badly beaten by Del and his men. At that moment, Marty arrives to see Gary's body fall from his apartment to the street. Del calls Marty, explaining that it wouldn't be wise to divorce her given how much she knows and offers to "take care of the Wendy problem". However, Marty manages to answer Del's earlier riddle about his Aunt, which saves Wendy's life.

Marty is later seen at the bank, assuming he is going to collect his money, he is met by two federal agents, one of which holds a notepad with writing such as "are you under duress", while the other searches him for wires. He explains that he hasn't been kidnapped or anything, just has a business opportunity that requires cash. Marty is allowed to leave with his money after threatening to out the bank for lack of funds.

Marty hands over the money to Del, however, is $6,950 short. Del agrees to buy his minivan for the $27000 it is worth to cover the cost but leaves Marty with the $20000 and an agreement to lease the minivan back to him for $1000 a month. Del sends the $7.9 million to Ozark with him and clean it, however, Marty retorts that it is already clean and cleaning it again would lose him money. Del, however, does not care about the loss but wants to see if Marty is capable of his plan. Del reveals that he had no idea that Bruce and Hanson had stolen his money, but killed Liz on a hunch.

Actor and director, Jason Bateman released a series of annotations regarding one of the scenes within the episode. The script pages were released to the public with the following annotations to break down the scene. [1] 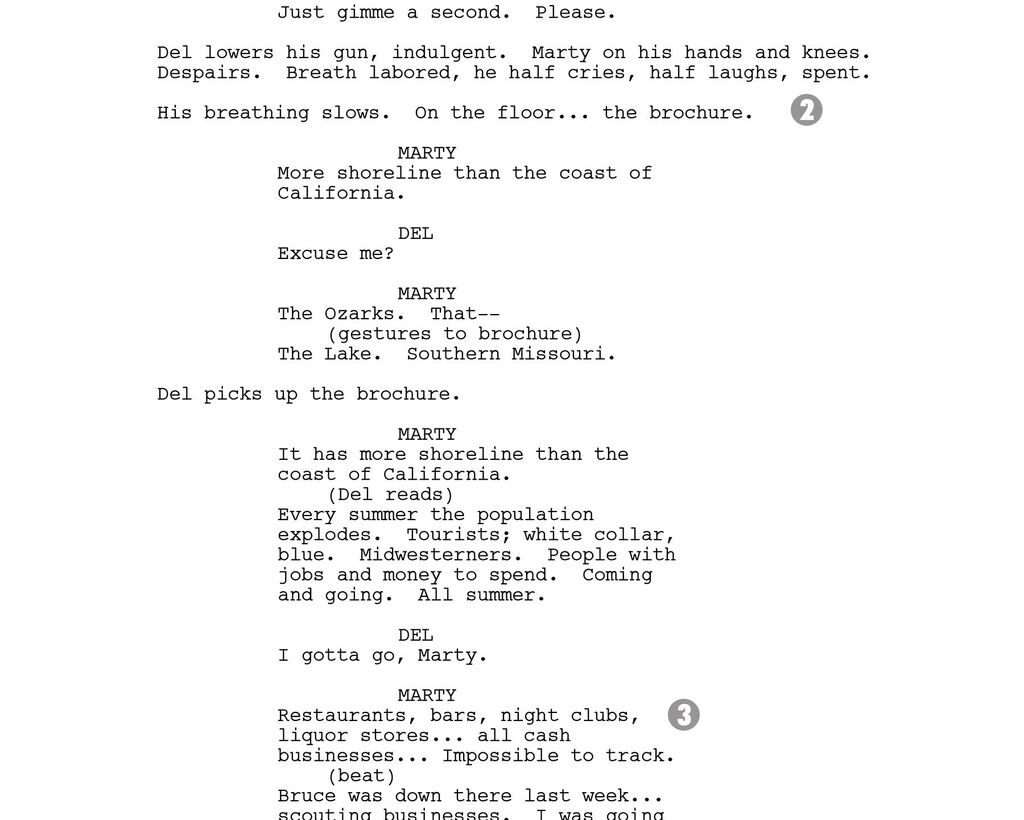 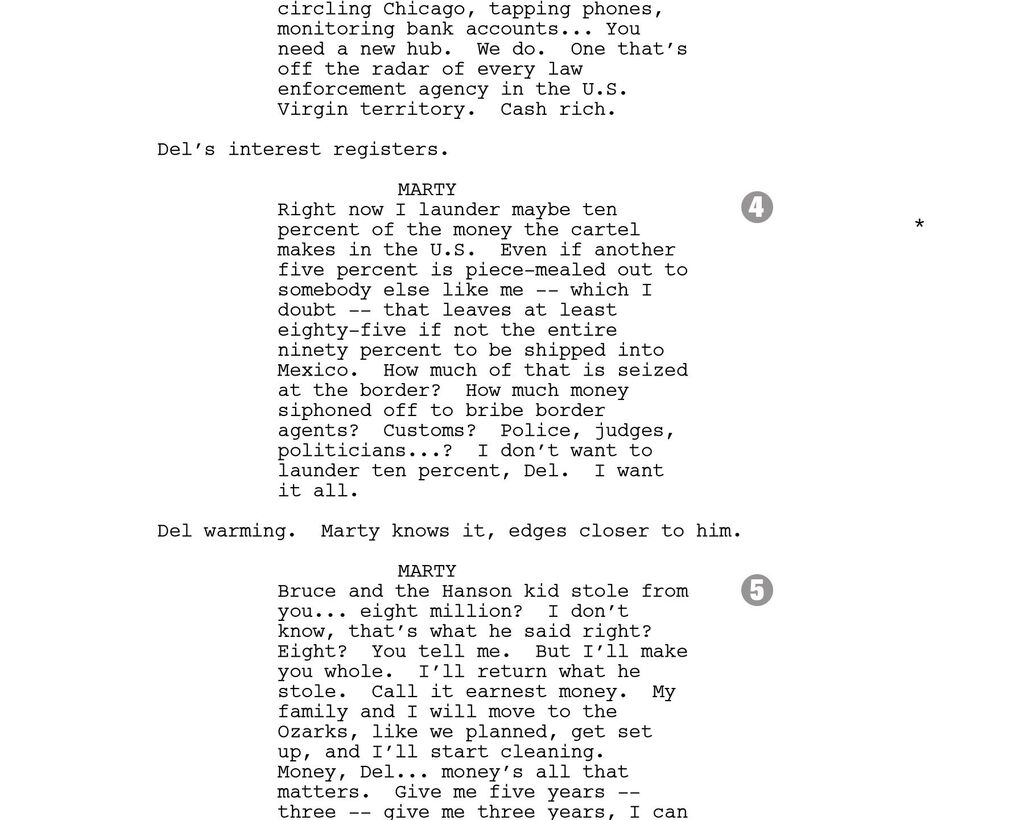 Marty: "This place right here has more shoreline than the whole coast of California. And apparently, every summer. Hang on, listen to me. Every summer, the population of this place explodes. Tons of tourists. Midwesterners from all over the place. Blue-collar, white-collar, loaded with cash."