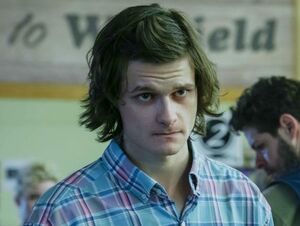 Wyatt Langmore is a member of the Langmore family and son of Russ Langmore. He is deeply rattled by his father's death, and Ruth takes effective guardianship over him. Unfortunately, the only adult in his life, Cade, is a career criminal who often involves Wyatt in his schemes, much to Ruth's dismay.

Due to his intelligence and her urging, Wyatt is accepted into the University of Missouri. He is reluctant to accept the offer due to not wishing leave behind his brother, Three, and due to the unanswered questions surrounding his father's death. He becomes a vagrant after discovering the truth behind his father's death, and eventually falls into the clutches of Darlene Snell.

Wyatt is a highly intelligent and caring person. He is very close to his family, particularly his father Russ and his brother Three.

Wyatt is noted by Russ and Ruth to be the most intelligent member of the family, and they both want him to attend college so he can have a better life. However, his poor school attendance and reputation as a Langmore results in his school counselor refusing to allow him to apply to a university, instead pushing him to attend technical college. He eventually writes an inspiring essay based upon his social "curse" of being a Langmore, which contributes to him being accepted to the University of Missouri.

Wyatt can be manipulative at times, particularly when he first meets Charlotte Byrde and tricks her into riding on a stolen boat with her, though he does eventually apologize for it and the two become friends. This ends however when Russ dies and Wyatt suspects that Marty was involved until Ruth tearfully admitted that she killed Russ and Boyd, causing Wyatt to sever all contact with Ruth.

In Season 3, we see Wyatt living as a vagrant for a while. He is receiving money from Ruth that he is not taking or using as he is still angry with her for killing his father. He gets arrested for breaking and entering, but is bailed out by Darlene. She takes in Wyatt and he quickly comes under her sway, eventually becoming her lover. Ruth attempts to reconcile, but is initially rebuffed by Wyatt, who tearfully says ruined his life. But he eventually and slowly attempts to mend things with Ruth, and after she quit working with Marty and decided to come work with Darlene, it seems that they are back on good terms again.

Wyatt and Charlotte are friends, and grew particularly close after the death of Wyatt's father, Russ. Charlotte had described Wyatt as "not like the rest of them", referring to the Langmores' reputation and prior dealings with the Byrde family. They are known to smoke marijuana together.

Wyatt is shown to be somewhat protective of Jonah, possibly because he is Charlotte's younger brother. Wyatt pummeled a bully who was picking on Jonah outside of school, leading to his expulsion.