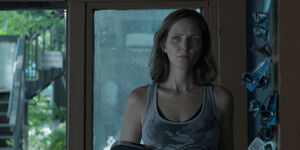 Rachel is the owner of the Blue Cat Lodge, the first business that Marty uses in his money laundering operation. She soon discovers Marty's money laundering scheme, but allows him to stay after he begs and provides her with evidence of her non-involvement in the scheme. This occurs when her business is finally succeeding with Marty's assistance, after years of struggles and disappointments, and this discovery served a big blow.

Rachel's relationship with Marty never improves, as she remains unable to trust him. Marty hides $50 million of cartel money in the walls of one of her cabins. That night, Russ and Boyd Langmore try to kill Marty, but are electrocuted by Ruth. Their bodies on dock of the Blue Cat Lodge cause an altercation with one of the cartel's representatives. This pushed Rachel to investigate the Byrde family's activities in the cabin that night, and she discovered the hollow walls.

After a conversation with Agent Petty, who was mourning Russ's death on the porch, Rachel steals $300,000 from the stack and leaves town. She bounces between New Orleans, Miami, and Vegas. Some time later, she begins to struggle with substance abuse, leading to her crashing her car while under the influence. Agent Petty uses these legal troubles to coerce her into spying on Marty.

Rachel eventually tells Marty about Roy's use of her as an informant. Soon after, Rachel is sold fentanyl-laced heroin by a local dealer, She OD's on the product and is hospitalized. The contamination can be traced back to Darlene Snell.

Marty coerces Roy into cutting Rachel loose, and he buys her a plane ticket to Miami and a stay at a substance abuse rehab center. Upon receiving the ticket, Rachel kisses Marty and he leaves.

Rachel dies after taking drugs that have been poisoned.

In The Precious Blood of Christ, Rachel is arrested for three crimes. To save herself, she makes a deal with Agent Petty to help him catch Marty.

Rachel is an honest, blunt, and dependable person who takes her job as the manager of the Blue Cat very seriously. She can come off as blunt and acidic to people, but deep down she is a good person who only wants the best for those that she cares about.

She is initially wary of Marty when he shows up and becomes the new owner of the Blue Cat. But she slowly begins to trust him, this breaks down once she finds out what Marty truly does for a living. She ends up stealing his money and fleeing from the Ozarks. She later learned to trust Marty when he proved his loyalty to her by helping her get Petty off of her back and get him to back off. She also seemed to have romantic feelings for Marty.

She is shown to have a bit of an addictive personality, she tells Marty about her enjoyment of having casual sex with strangers, this is shown later on when she has sex with a stranger in a bar, but this was mainly to annoy Petty, who had advised her earlier to try and do anything to get on Marty's good side, including sleeping with him.

By Season 2, Rachel spiraled into drug addiction and managed to get herself into trouble when she is arrested, which attracts the attention of Roy Petty, who begins to use her in order to keep tabs on Marty and feed him information, using illegal drugs in order to keep her under control. Her relationship with Petty is tumultuous from the start, and she clearly despises him. She eventually is freed from Petty's control when Marty steps in and forces him to back down.

Marty and Rachel have a complicated relationship. Marty purchased the Blue Cat Lodge to use in his money laundering operation. Rachel despised Marty when she discovered his true intentions, but stole hundreds of thousands of dollars from Marty's office before skipping town and developing a crippling opioid addiction.

Rachel later relies upon Marty when she is forced by Roy to be an informant for the FBI. She kisses him after Buddy's funeral to stop him from discussing his private investigator while she was wearing a wire. The following day, they kiss again. Marty sees Rachel from a final time when he gives her a ticket to Miami and a stay at a rehabilitation center. Rachel kisses him once more before he leaves. Wendy suspected her husband and Rachel of having an affair, but their relationship never became sexual.