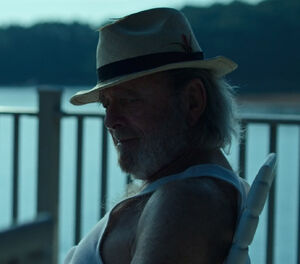 Buddy Dyker was an 82 year old man with terminal heart failure. The Byrde family rented his home with a condition that Buddy is to remain in the home until he dies. Doctors have given Buddy a life expectancy of 12 to 18 months max.

Buddy was an American helicopter pilot in the Vietnam War, eventually earning a Purple Heart.

Buddy was involved in the Kansas City Mob. He is believed to be a retired mobster and did business in Detroit.

Buddy died in the passenger seat of his car from his heart condition after plowing and burning the Snell Family's poppy fields.

Outwardly, Buddy can come off as cantankerous and crass, often letting people know what he thought bluntly and without care for how offensive or insensitive that it might sound. Though, as the Byrdes got to know him he proved to be dependable, good hearted, and loyal to them.

Buddy didn't care what people thought of him, this was showcased by his crass nature as well as his hobby of skinny dipping in the lake, not caring who was watching him. Buddy had a 'live life to the fullest' mindset when it came to his life, especially considering that he was about to die anyways. He attempted to live his life as much as he could before his eventual demise.

Buddy also showed racist tendencies, such as when he threatened Garcia to shut his 'tamale hole.'

Of all the members of the Byrde family, Buddy was the closest with Jonah.

Though their relationship was strained at first, due to Buddy's crass nature, but Wendy and Buddy eventually became good friends. Wendy stated at Buddy's funeral that he is the person she always wanted to have a drink with at the end of a bad day. She credits Buddy with saving her family.

"We weren't related, but he was family."

Other characters that know this character are Marty and Charlotte Byrde who become closer to family. Detroit and KC Mob mobsters.

"You need to shut your tamale hole” Season 1 episode 10

”If you’ll excuse me, I’m gonna wash down some heart medicine with a large bourbon.” Season 2 episode 1

Did you know that this character has been married before?