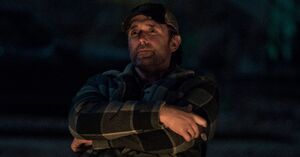 Cade Langmore was the brother of Russ and Boyd Langmore and father of Ruth Langmore.

Cade grew up in the Ozarks with his brothers, Boyd and Russ, but spent most of his life in prison.

Desperate for Marty Byrde's money, Cade assaults Charlotte at the Langmore homestead while she is speaking with Three. Ruth holds her father at gunpoint until Charlotte can get in her car and Ruth drives them to the safety of the Byrde home. Upon learning that Cade assaulted her daughter, Wendy asks Helen Pierce to orchestrate a hit against him.

As a setup, Wendy meets Cade at a diner in town. She offers him $500,000 to leave town immediately. He accepts the offer, but is met by Nelson along the way, who guns him down and collects the half million as payment.

Despite his quick temper and sadistic tendencies, Cade is probably the most shrewd and intelligent of his three brothers, something that he passed on to his daughter Ruth. He is also probably the most amoral and ruthless of his brothers as well. He is cold, calculating, sadistic, callous, and bordering on a psychopath.

Many people tend to underestimate Cade because of his rather reckless actions, but he is a very intelligent man. He quickly deduced that it was Ruth who killed Boyd and Russ and consistently mocked and belittled her for it, even going as far as threatening to tell a grieving Wyatt the truth about what happened to his father, thus forcing her to tell him herself and greatly straining their relationship. He also deduced Roy Petty's involvement in his brothers' death and confronted him about it, killing him when Roy didn't tell him anything and callously said that he'd end up in prison once more with his daughter.

Cade's most defining trait asides from his intelligence is his recklessness. He has a bad habit of starting things with people without fully comprehending the consequences of his actions, this tendency also leads him to not always think clearly when he's trying to cover his tracks, for instance when he killed Roy, he foolishly put rocks into his clothes and sent him down the river and crudely covered Roy's truck up with branches without considering that his fingerprints would be all over it and that he hadn't bothered to clean anything up. He also continuously pressured Ruth to try and steal Marty's business from him without seeming to understand how dangerous it would be to try and do something of that sort, it was this recklessness that eventually lead to his death.

Despite verbally abusing, mocking, and threatening Ruth, he did love her and that was probably the only redeeming factor of his character. He also loved his brothers, despite the fact that he thought of them as idiots. He was particularly enraged when, while confronting Roy about his involvement in his brothers' death, Roy coldly rebuffed him and callously said that Ruth would end up in prison alongside him, which resulted in Cade murdering the agent and dumping his body in the river.