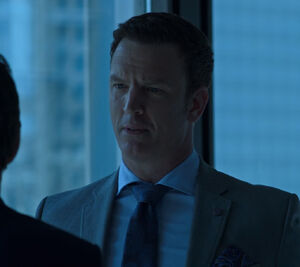 While we don't get to know Bruce that much throughout the series, we find that Bruce is the foil of Marty. While Marty is low key, listens before he speaks, and is generally more quiet, Bruce is loud, boisterous, and slightly arrogant. He is more extroverted than Marty is and more confident in that matter. He also seemed to lack foresight as he decided to skim money from the Mexican Cartel, even though he clearly knew what Del and the Cartel were capable of if trifled with. He also was proven to be a bit of a coward, as he took a deal with the FBI to turn informant on Marty and Del in order to save himself, as well as getting defensive of when he was accused of stealing from Del, though to be fair anyone would be afraid of making someone as dangerous as Del angry.

Despite his faults, Bruce proved to be loyal to Marty (to a fault) until the end and showed some remorse for his mistakes, though this may be more because he dragged Marty into the mess that he made more than skimming from Del and the cartel. He calmly admitted to Del that he alone was responsible for skimming from him and that Marty had nothing to do with it. He accepted his fate and apologized to Marty for getting him into this situation before he was abruptly shot and killed by Del.