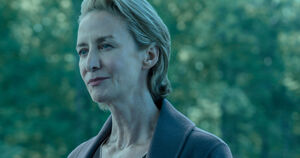 Helen Pierce is a lawyer for the Navarro Drug Cartel and one of Omar Navarro's closest associates. Shes takes the place of Camino Del Rio upon his death.

Helen's father was a refrigerator repairman who died from a heart attach at 61. Her mother was a teacher and is still alive and "too mean to die".

Helen has children, including a daughter, Erin. She is divorcing her husband, but troubles late in the proceedings cause the cartel to get nervous and waterboard her for any information her ex may know about their operations.

When Wendy's brother Ben appears, his Bipolar Disorder causes him to act out and he revealed to Erin her mother's true occupation and employer. Wendy attempts to get her brother to Knoxville in order for him to lay low and avoid execution. However, after realising that her brother's unstable condition and unpredictable actions, she calls Helen and reveals their location so that Ben can be taken care of.

In the season 3 finale, Helen makes moves to eliminate the Byrdes. She has her name added to the casino licence and goes to Agent Trevor Evans to declare that Marty is now prepared to testify against Navarro and enter Witness Protection. She has Evans type up and print a confession for Marty to sign and plans to use the fake confession to have Marty executed. Upon arriving at Navarro's mansion for the baptism of his son, Helen is shot dead in front of a stunned Marty and Wendy, who are greeted by a hug from Navarro who tells them that this is their beginning.

Helen is a cold, tough as nails, and ruthless enforcer for the Navarro cartel. She usually acts as their negotiator in situations, as well as to help them with any legal trouble they may have gotten into. She was initially asked to keep an eye on Marty and Wendy and keep them in line. They eventually became friendly and even partners for a while, though that all ended.

Despite how cold and ruthless she can be, she does love her family. Despite her contentious relationship with her ex-husband, she loves her children deeply and went to great lengths to hide what she actually does from them. When Ben eventually broke into her home and told Erin what she really does, Helen was understandably furious and wanted retribution. It was this, and her attempts to undermine the Byrdes' operation which led to her fate.

"Don't fuck with me. And don't fuck with my client. Understand? They'll kill your children. They'll gut your fucking wife. Do you want me to tell you what they'll do to you?."