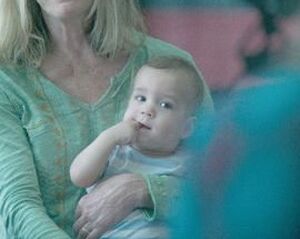 Ezekiel Young is the biological child of Grace and Mason Young. He is orphaned shortly after his birth and temporarily fostered by the Byrde family before being transferred to Darlene, who is desperate to raise a baby boy after the death of Ash.

When Darlene Snell murders Grace Young, she cuts Zeke from her womb and leaves him in the Young residence for Mason to find. Mason does his best to raise his child, but suffer a gradual mental breakdown after the loss of this wife. Zeke is eventually taken by Social Services in Jeff City after Mason is reported for preaching on the street with the child in the middle of winter.

Mason kidnaps Wendy Byrd, which prompts Marty to convince Social Services, with the help of Charles Wilkes, to release Zeke into the custody of the Byrde family. Unfortunately, Marty is forced to shoot Mason soon after returning his baby, and the Byred bring Zeke home to foster temporarily.