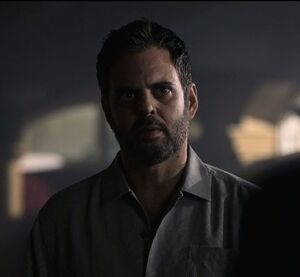 Louis was one of the Navarro Drug Cartel's accountants in charge of money laundering. FBI agent Roy Petty attempted to convince him to rat on Camino Del Rio, and Louis seriously considered the offer. Before he could decide whether to work with Roy, he was killed and replaced by Marty Byrde.

Louis has a son.

When Marty agreed to launder money for the cartel, Del ordered Louis to be killed. He was strangled and his eyeballs gouged out.

Louis is a "cheater". He cheats in business, his relationships, and even golf. His cheating of the Navarro Drug Cartel is what brought about his gristly end.