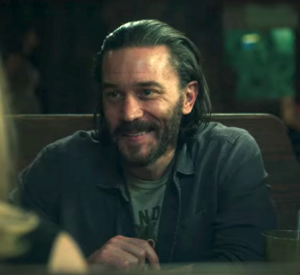 Ben and Wendy grew up relatively poor. Wendy was fiercely protective of her brother, willing to fight anyone who picked on him.

Ten years prior to the events of Ozark, Wendy and Marty were forced to have Ben committed to a psychiatric treatment facility due to his uncontrolled bipolar disorder posing a danger to both himself and others.

Ben was a kind hearted, loyal, dependable, and generally a good man. He struggles with bipolar disorder and, because of it, can act irrationally and impulsively. He is viewed as a 'black sheep' of Wendy's family due to his illness and his impulsive behavior.

After moving in with the Byrdes, he quickly became close with the family, particularly Jonah, becoming his 'best friend' after Buddy's death. He was also close with Wendy, though their relationship became contentious after he discovered the shady things that his sister and her husband were up to. While he was initially tolerant of it, he eventually becomes disillusioned with them after realizing the true extent of what they do and also going off of his medication. He also fell in love and formed a relationship with Ruth, and she was devastated and enraged when he died, going as far to sever ties with Marty and Wendy after learning that Wendy had okayed the hit on Ben.

After throwing away his medication, Ben becomes less stable and begins acting more rashly than usual. After getting arrested for assault, he is sent to a mental hospital in order to get help for himself, much to his devastation.

Ben's major flaw was his impulsiveness, he often would do things without fully understanding or comprehending the consequences of his actions, such as when he vandalized Frank Cosgrove Jr's car, punching Marty in the face in front of the crowd, when he told Helen Pierce's daughter Erin what her mother really did for a living, calling the cops on himself and Wendy when he feared that Helen would have him killed, and then tried to call Helen on a burner phone to apologize for his actions. It was these impulsive actions that led to his unfortunate demise.