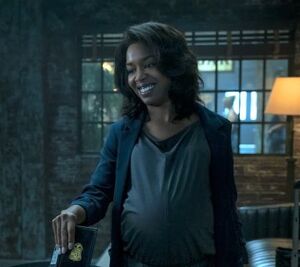 Maya is, to put it bluntly, the opposite of Roy Petty and Trevor Evans. She is honest, dependable, principled, and very 'by the books' in terms of her approach to the law. She is sent to keep tabs on Marty when he takes over a casino which the FBI decide to take over in order to watch Marty.

Maya's relationship with Marty is mostly friendly, she offered him a far more generous deal than what Evans or Petty might have offered. While he initially agrees, he eventually goes back on his word and tries to manipulate her into becoming corrupt.

Maya, being an FBI agent, has a very good judge of character and is able to read people very well, such as when she refused to take Marty's offer on catching known criminals as she knew he was most likely attempting to manipulate her, but also she knew that it wasn't part of the deal that she offered to Marty and thought that he was trying to find ways around going to jail. She also correctly suspected that Sam Darmody was a part of Marty's money laundering scheme and had him arrested for his involvement, though this was also to try and hurt Marty, whom she was growing frustrated with.

A flaw of Maya's is that she sometimes allows her personal integrity to cloud her practicality, which led to her getting in trouble with her bosses at the FBI. She eventually becomes frustrated with Marty's flakiness and resorts to some underhanded tactics in order to try and hurt Marty, which he compared to something that Petty or Evans would do. That being said, she is not motivated by vengeance as Petty and Evans are, but rather with justice.