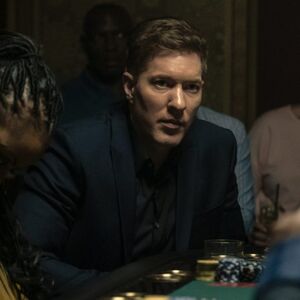 Frank becomes a problem for the Byrde's operations when he displays rude behavior and foul language during a high-stakes poker match on the Missouri Belle. When removed from the game, he threatens Ruth, and she throws him off of the casino boat's deck.

Frank Jr is a textbook mobster's son. He's an arrogant, spoiled, disrespectful, and relatively detestable individual. He often uses his power as Frank Cosgrove's son to bully and harass others as he sees fit. He's also proved to be impulsive and reckless, expecting his dad to clean up the messes that he makes. An example of his reckless streak is when he beat Ruth to near death even though he had been warned that she was rendered untouchable, which led to Marty ending his business partnership with Frank Sr.

He also proved to be a complete coward when he faced someone that he could not bully or harass, like with Darlene Snell. He shamelessly begged for her to stop and apologized for hurting Ruth, though Darlene shot him in the groin with a shotgun anyways.