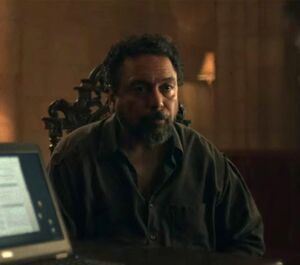 Omar Navarro is the leader of the Navarro Drug Cartel. He is first introduced into the story when Wendy Byrde and Helen Pierce come to him with a proposition of expanding into the hotel industry as a legitimate business venture.

Navarro is a cold, vicious psychopath with little regard for anyone, rather than himself and his family. He views and treats his associates more like expendable pawns than actual associates. He is also utterly callous and heartless towards others, callously disregarding the fact that Wendy had her own brother killed for his sake, coldly telling her that she 'done what she had to.'

In contrast to Del, who was more patient and level headed. Navarro is impatient, insatiable, ill-tempered, and short. As Season 3 rolled around, we see him become more paranoid due to the war that he is having with rival cartels.

Navarro shows himself to be reasonable and calculating when it suits him. He hears out Wendy's plan for expansion to legitimate businesses and agrees to it, asking for her to buy out a horse farm for him to use, due to an apparent fondness for horses. It is revealed that this was partially a ruse in order to strike back at the rival cartels by castrating one of their horses that they own. When Wendy calls him and chastises him for this move, he angrily snaps back at her, telling her that he views her merely as a pawn that he can use and that he owns her.

Despite his sociopathic behavior, Navarro does have a soft side. He deeply cares for and loves his family and was clearly devastated and infuriated when his girlfriend and other members of his family were murdered by his rivals, angrily throwing things around when this happens. He also sent his three children to stay with Helen for a while for their safety and greeted them happily when they returned to Mexico.

All in all, Navarro is very much a kingpin and has all of the traits that come with it: cunning, sociopathy, manipulation, meticulousness, and a capacity for violence.